Improving the viability and productivity of seed potatoes

Improving the viability and productivity of seed potatoes 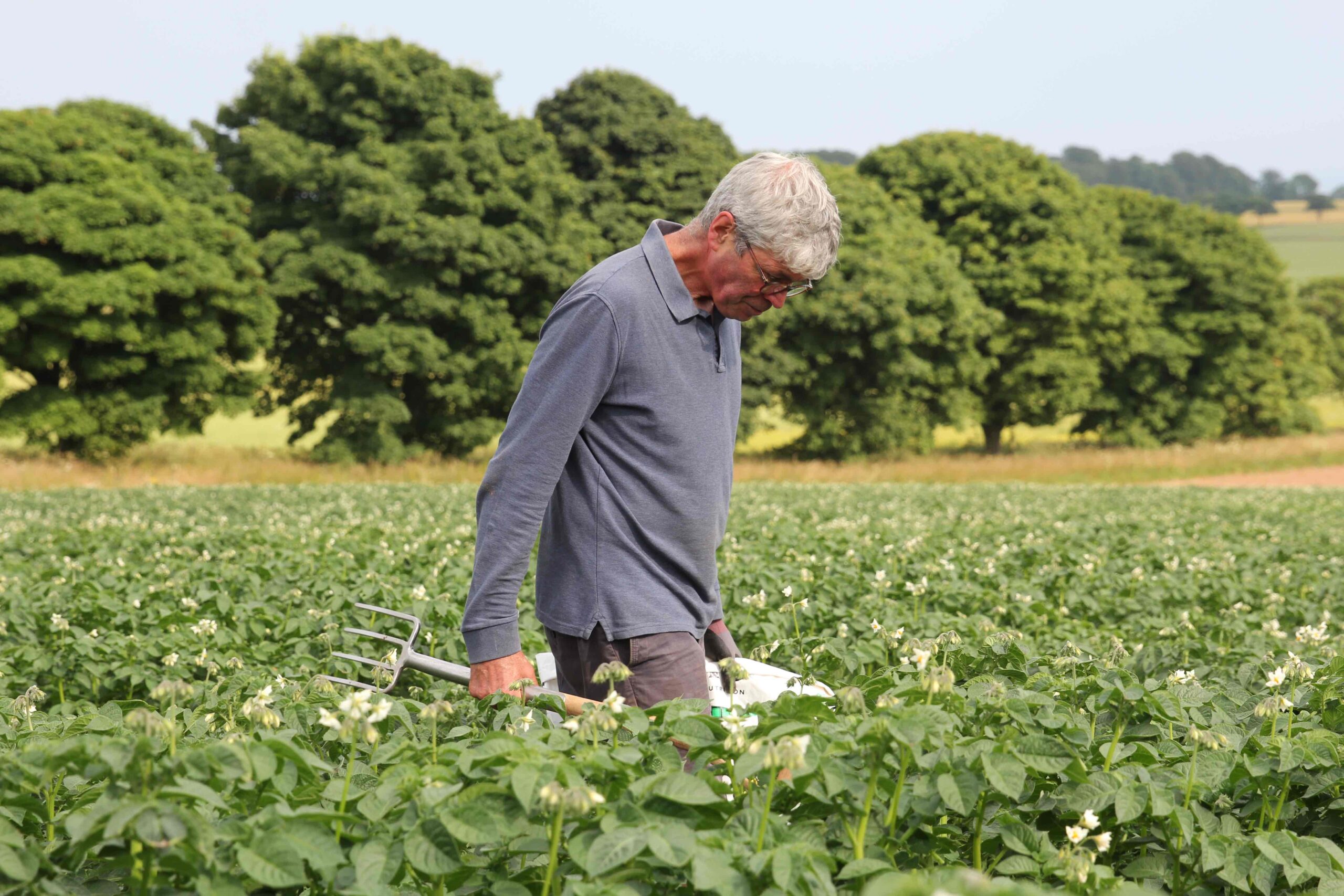 Arable farmers the Reids, at Milton of Mathers farm near St Cyrus, Montrose, have been at the heart of seed potato trials in Scotland for over a decade, paving the way for a greener sector, less reliant on chemicals.

The farm itself extends to 250 ha of mixed spring barley, malting winter wheat, winter oilseed rape and seed potatoes, which are supplied exclusively to McCain.

For over ten years now, Jim Reid has been involved with various trials to improve the viability and productivity of his seed potato crop. He has hosted the AHDB’s Strategic Potato Farm (sPot) over the past two years, focusing on desiccation, crop, and soil health trials.

Although AHDB potatoes is to cease at the end of March, discussions are underway to explore alternative funding options, to allow the important research being undertaken by the project to continue.

Turning to the pest which has afflicted Scotland’s potato growers for decades, Potato Cyst Nematode (PCN), Jim explained that he has successfully been trialling a new natural biological treatment which could be game changing for the sector.

“We have been GPS testing land on the farm where we know there is PCN and then have been selectively treating that area with chitinous soil amendment, which is derived from wood chip and shellfish waste,” explained Jim. “This reduces the viable PCN population within a 2-3 year period.”

Common practice in the UK when soil testing for PCN is for SASA to analyse 400 ml for the first 4ha and if PCN is found, then that field parcel is taken out of seed production.  An application for a soil test to lift the recording restrictions will not be accepted until a minimum of 6 years has elapsed.  Statutory testing data collected by SASA shows that the area of land recorded as infested with G. pallida, currently 6,200 ha, is doubling every 7–8 years and now accounts for nearly 70% of findings.

In Holland, Jim explained that soil is tested immediately after the potato crop using a grid system and sampling at 10 litres of soil per ha which increase the probability of finding very low levels of PCN to allow proactive mitigation measures. When PCN is found in pre-statutory testing, a 20m buffer strip is set aside on either side of the infected area but the rest of the field is given the greenlight for seed production.

“Seven years ago, we lost 4ha of ground declared infested by PCN despite the affected area only covering the width of my truck,” he continued. “By pre-statutory GPS soil sampling and targeting applications of chitinous soil amendment, we can sustainably manage the pest and target resistant PCN varieties for seed production.”

Jim has also been participating in desiccation trials and has been testing four different nozzle types for spraying, then analysing and comparing the deposition of chemicals on his plants. 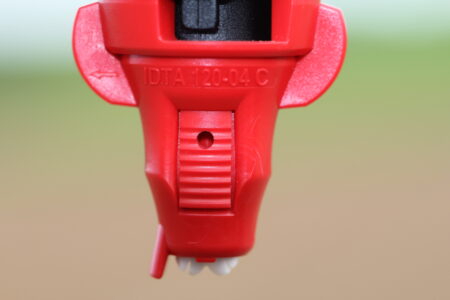 He has been evaluating a Guardian Air Twin nozzle, a Wilger nozzle, a Syngenta 3D ninety nozzle and a Lechler IDTA – with the latter two nozzles producing superior results.

“So many farmers will choose an air induction nozzle to reduce spray drift, but they don’t optimise deposition within the canopy and most stuff we use on potatoes is contact-based rather than systemic material, so coverage is really important,” Jim explained.

Modern nozzle designs can deliver a spray quality that minimises spray drift without compromising either spray coverage or product efficacy.

“At the end of the day you only have 13 perfect spraying days in any given year, so on those other days, farmers have to be using the right nozzle to ensure they have good coverage,” continued Jim.

“Nozzle selection in the potato crop should be made on a case-by-case basis; taking account of each operational parameter to ensure optimal product delivery and performance. A complex range of factors that influence sprayer output, and thus product delivery, must be considered. Water volume, operating pressure, boom height, product formulation and concentration may all adversely affect spray quality and product efficacy. However, a better level of canopy coverage is achieved by 90% drift reduction nozzles with a coarser spray quality being less prone to off-target spray drift.”

Elsewhere he has been looking at the difference between sulphate of potash and muriate of potash – the latter being a more expensive fertiliser but better source of potassium for seed crops.

“The difference in our canopy throughout the season has been quite striking,” reflected Jim. “SOP has kept the canopy more upright which has made for easier roguing and it is a better target for spraying.” 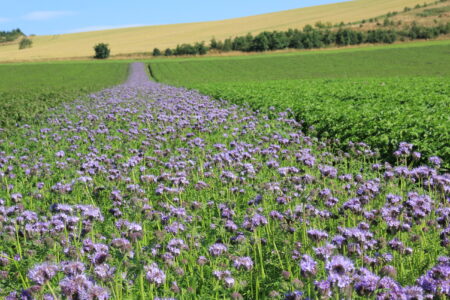 A range of integrated pest management techniques are being trialled, including wildflower corridors stretching from headlands to the middle of the field to entice natural aphid predators into the potato field. He explained that for too many years the sector has been so reliant on pyrethroid insecticides. Over reliance on a single class of frequently used insecticide has resulted in selection for pyrethroid resistance in some aphid species.

Another form of natural defence he has been assessing is that of straw mulching, spreading chopped wheat straw before emergence of potatoes.

“We had a higher saleable seed yield,” reported Jim. “This is possibly due to the straw providing insulation during the cold spring last year and then helping with moisture retention during a dry May,” he explained, suggesting that this is something high grade growers could be using as an alternative to chemicals.

Scottish Agronomy has been working closely with the Spot project, to offer agronomic advice and support, as well as oversee the range of work Jim has been conducting.

“The team at Scottish Agronomy has put a lot of work into the trial assessments,” Jim continued. “People would not believe the amount of hand digging which has been carried out. It has been a great partnership from the start and the team at McCain have also been extremely supportive.”

Eric Anderson of Scottish Agronomy is overseeing the range of work being undertaken on the sPot farm.

“Working closely with Jim, and the team at McCain, we have been able to look at practical aspects on a real seed farm and demonstrate tangible solutions to the wider seed sector,” said Eric. 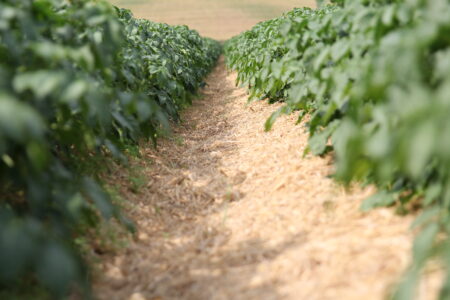 “The future of seed potato growing is changing rapidly,” he continued. “We need to look at the dynamics of biology and ecology and how we can best practice Integrated Pest Management.

“With the demise of AHDB potatoes there will be a small window of opportunity available for the industry to come together and coordinate the best use of limited resources. It is important that all feel part of the discussion, if we are to find an acceptable solution.

“It is an unfortunate fact, that applied research and industry innovation is a costly business. However, a grower funded and led body would be an excellent position to leverage additional funding from other research providers and thereby provide value for money. There must be a plan in place to ensure near market research and development continues but this must be driven by growers for growers,” Eric urged.

“What we have achieved is translational science at a practical level and we want to see a continuation of this vital work being conducted and funded on a seed innovation platform farm going forward.”