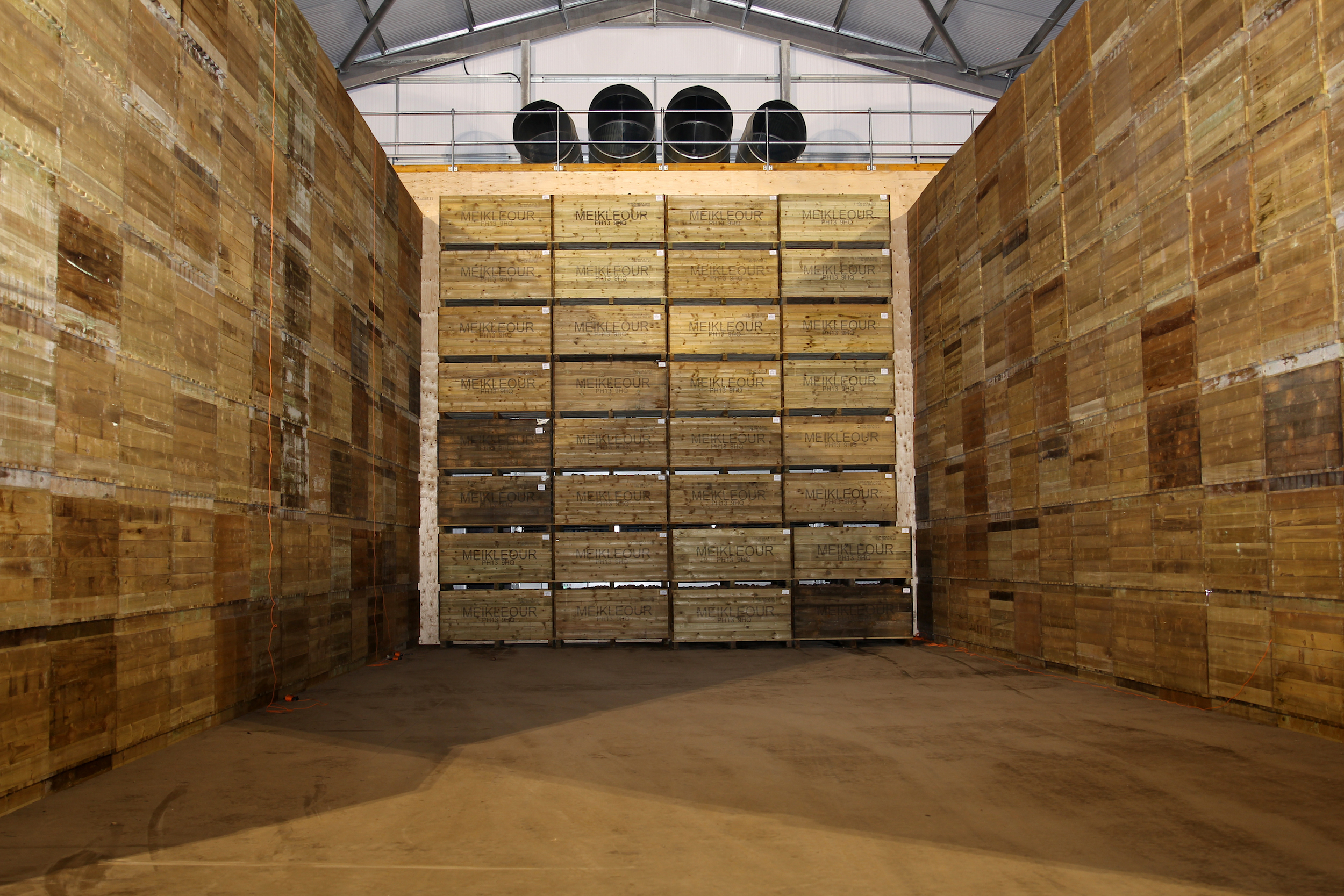 Eric Anderson, Senior Agronomist at Scottish Agronomy looks at some key issues to be thinking about ahead of potato storage this autumn.

For seed, using positive ventilation is accepted as best practice.  Normal ventilation rates for box stores are typically designed to be 0.02 m3/s/t but this rate of air flow is primarily to aid distribution, rather than that required to remove transferred heat and moisture.  The best way to deal with excess moisture on the surface of harvest tubers in boxes is with positive ventilation systems.  Positive ventilation with box stores need up to 0.08 m3/s/t to allow for air leakage.  Positive systems require fans which can act against a modest system pressure but they still make up the minority of box storage ventilation systems. However, it might be argued that they are the best available solution to many of the problems currently experienced in box stores with airflow.

The LETTERBOX is the most common type but the size of this system is usually restricted to around 10 boxes deep from the duct by the amount of air than can be delivered through the relatively small pallet slots. Use the highest airflow rate available for drying.  Batch systems are well suited to drying as air flow can concentrate on a small tonnage.  Letterbox systems are generally limited to 8 ‑ 10 boxes deep for effective drying.  True letterbox systems can be set up by building a plenum at the back of the boxes, facing it with plywood and cutting slots to line up with alternate pallet slots. Air is delivered into the plenum, through the open slots and under the boxes to the far end of the stack where the opening is closed off using foam bungs. The closed slot means air has to travel up through the box above and down through the box below to exit via the next pallet slot.

The SUCTION WALL system, where air is sucked through the slatted ends of boxes, is also increasing in use; it is a more adaptable but less space-efficient ventilation method in that it can be used even when the store is part-filled. The system is again based around a plenum at the back of the store but in this instance it is connected to a series of covered voids between the columns of boxes, from which air is extracted.  Suction wall systems are more suited to stores with more than 10 boxes per row.

The aim is to dry the tubers and remove field heat whilst avoiding condensation, and promote wound healing.  If using a letter box system with a rotation of boxes, a period of at least 2 ‑ 5 days of positive ventilation is required at a holding temperature of 10 ‑ 12°C (or longer if temperatures are lower than this) to reduce the bacterial and fungal infection risk.  Using outside air that is cooler than the tuber temperature is ideal but try to avoid bringing in outside air warmer than the temperature of the tubers already in store.  Where an air-mixing system is used that combines outside and inside air, aim for no more than 4°C difference between the air used for ventilation and the tuber temperature.

In a fridge store where bringing air from outside is not possible, start recirculation from the point of store loading.  The temperature of the cooling air should be kept in a range between 1 ‑ 4°C below the crop temperature, but no cooler.  Ideally, the fridge can be set at 2°C below the tuber temperature to equalise the tubers in store as they are loaded.  Once wound healing has occurred, cooling rates should aim for a maximum of 0.5°C pull-down per day until the target holding temperature is achieved.  Adequate ventilation is required during pull-down to remove surface moisture.  While a relatively small temperature differential may reduce the cooling rate, a larger one can cause excessive temperature differences within boxes.  This can result in condensation when humid air within the centre of the box rises and condenses on the cooled surface tubers unless positive ventilation is used.  Once the target temperature is achieved, recirculation can be reduced to 10 ‑ 20 minutes every 2 ‑ 4 hours depending on the store.

Mechanical wounds allow fungi and bacteria to develop in the flesh of the tuber.  Rate of wound healing is influenced by temperature, in cooler stores the time taken to wound heal is increased.  Wound healing and temperature pull-down strategy in ware crops depends on final market and likelihood of disease development.  In general, longer curing will be required for mechanically damaged crops or skin spot susceptible varieties i.e. Cultra and King Edward.  For these varieties, it is preferable to hold the tubers above 10oC for at least 10-14 days.

It is also important to dry the crop properly to ensure that rots do not develop.  If preventing the development of silver scurf and black dot are essential, as soon as wound healing of the last crop loaded is complete, the store should be brought down to its target holding temperature as quickly as possible, unless skin spot is the primary concern.  Piper and Estima require starting temperature pull-down as soon as possible after store loading.

Table  x Rate of wound healing and relationship with temperature