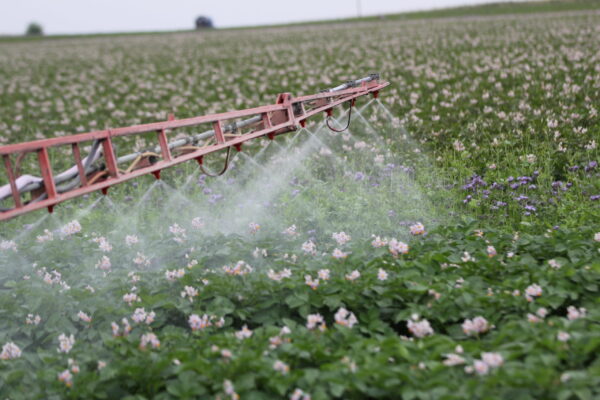 Pesticide applications are necessary to control crop pests, weeds and disease however,  awareness of environmental contamination is facilitating industry change.

Modern nozzle designs can deliver a spray quality that minimises spray drift without compromising either spray coverage or product efficacy.  Whilst spraying, it is important to think about complex interactions.  The product is only half of the end result.  The other half will come from the permutations of timing, nozzle choice, forward speed, boom stability, boom height, water volume, spray pressure, nozzle angle and the attention to detail by the operator.

Maximising the result of herbicides, blight fungicides and desiccants whilst reducing risk of drift, it’s an exciting potential of correct nozzle choice.  Spray application is most effective when the optimal droplet size for the intended target is utilised.  It is imperative to obtain adequate, three-dimensional coverage throughout the canopy.  With increased pesticide spray drift as a general concern, growers have shifted toward air-inclusion nozzles in order to produce larger droplets.  The question has been how this translates to technical efficacy in either a late blight or desiccation programme? 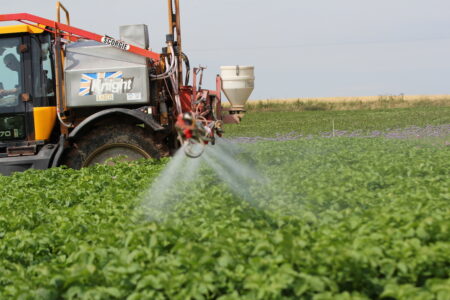 There is little information on the impact of nozzle type under a dense potato crop canopy.  There is a popular misconception that a fine spray is preferred.  The majority of understanding has come from data extrapolated from cereals and not measured in situ within a dense potato canopy.  The architecture of the potato plant canopy coupled with often close proximity of sensitive neighbouring crops creates an immense obstacle for adequate administration of pesticides.  The measurement of spray deposition in potatoes has historically been a labour intensive effort that has included chromatography, coated slides, miscellaneous fluorometry techniques and water sensitive paper.

Helios SC fluorescent yellow dye was added to the spray tank along with the desiccation treatment and sprayed via four different nozzles – Lechler IDTA, 3D ninety, Wilger and Guardian Air Twin.  All treatments were applied at 400 litres per Ha using the quarter boom sections, in two separate passes aligned to the nozzle calibration.

Individual leaves were selected from four plants replicated and paired up the field throughout the treatment using quarter boom sections from a Fastrac 2170 & Knight 2000 litre demountable 28m commercial sprayer with Scorgie booms.

Increased coverage of leaves or penetration of the canopy may not always accord to an increase in technical efficacy! The target crop was a seed crop of Pentland Dell sprayed on a calm morning of 2nd September 2021.

Advancements in consumer electronics have made the possibility of ultra-high resolution desktop imaging an economic reality for researchers.  Quantitative image analysis is now technically possible, although few have yet attempted it at modern high-resolution capabilities. This study combined assessments of the biological efficacy of the same desiccation treatment applied via the four nozzle types and investigated a digitised method of analysis for the contrasting the spray deposition. The leaves were digitally photographed on the field headland using a black box under fluorescent light.  The spray deposition and variation within the depth of the canopy were analysed a few days later via computer software by Syngenta in Cambridge.

Understanding more accurately the deposition of droplets deep within the potato canopy will ultimately give a much more complete understanding of the efficacy of a spray methodology, and empower growers to make more effective choices in spray application.  The spray quality of four commercial designs (conventional flat fan vs air inclusion), across two different water flow rates (004 vs 005 vs 2x 025), was established in relation to desiccation performance.

All four nozzles performed similarly in terms of rapid desiccation of the crop.

Flow rate, pressure and target orientation exert a significant effect. Coverage in the lower canopy was higher with the 2 x 025 flat fan nozzle but it should be noted the application was applied on a day with no wind. Had the conditions been more challenging, the 90% drift reduction nozzles are predicted to be more robust.  Angling the spray pattern when treating potato crops can significantly improve the efficacy of spray deposit, compared to application with conventional vertical flat fan nozzles.  The results demonstrate a clear trade-off between spray drift and coverage.

Quality of deposit depends on;

Previous studies indicate droplet size to be a major influence on droplet deposition.  The range of droplet sizes may afford a higher level of crop canopy penetration. This is important to ensure spray penetration of late blight fungicides or foliar desiccants to the lower crop canopy. Albeit small to medium droplets, are generally considered desirable for optimal coverage, they are vulnerable to drift.

This can be explained by the dynamic movement of air across the boom. In the process of spraying, as a continuous sheet of liquid is produced by the nozzles, the surrounding air is lifted up over the top of the boom. The dynamic movement of air creates a significant drop in pressure and lift above the boom. This has the effect of entraining small droplets into a spiral, such that they are sucked upwards resulting in the formation of vortices behind the boom and ultimately deposited on surfaces nearby. The larger droplets usefully possess sufficient velocity and momentum to continue along the trajectory, as emitted by the nozzle. 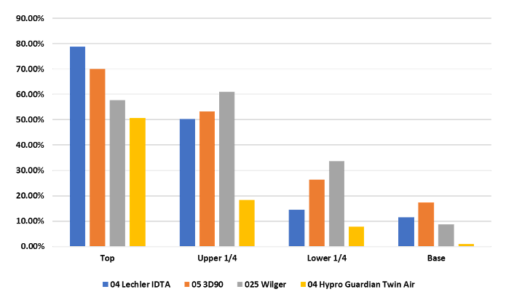 The deposition pattern that was observed further demonstrates the consequence of the relatively high application volume rate. With higher deposition on the top and upper canopy air turbulence and/or droplet bounce may be important.

Previous work has shown that with an increase water volume, the overall coverage was enhanced.  The activity of late blight fungicides and desiccation products are reliant on gaining sufficient coverage.

Table 2.0 explanation of nozzles used in the evaluation 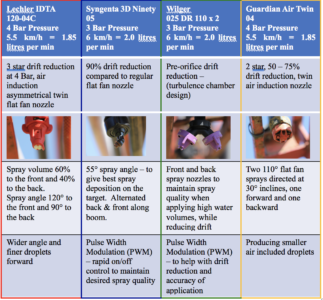 Ultra-fine tuning of the outlet orifice shape and other aspects of a low-drift spray tip design has resulted in the new Syngenta 3D ninety.  Avoiding drift keeps all the product on target and in the crop, as well as mitigating the effects of wind gusts that can disrupt the spray pattern during application; the intention of the 3D ninety design is to achieve the most even distribution across the whole target area.  According to Syngenta  it gives a 90% reduction in drift when compared with a regular flat fan nozzle.  The new tip, which is angled to penetrate crops with lots of foliage, is a pre-orifice design rather than an air induction type, which is commonplace for low drift nozzles.  Designed to be used with pulse width modulation (PWM) systems.  A 3D ninety 05 recommended for blight and pre-emergence herbicide sprays will be available commercially in spring 2022, with a choice of sizes from 03 to 08 following.

A pulse of change

Pulse Width Modulation (PWM) is a system for controlling droplet size and output, while retaining the nozzle’s spray pattern.  PWM has been used for years in the USA but is still to take off in the UK.  It’s ideal for operating at lower pressures and providing high drift control to higher pressure with more effective smaller droplets, all with the same single nozzle.  Instead of switching between separate nozzles, PWM controls the flow to a single nozzle by using a solenoid to turn it on or off at 10 times/sec (indicated as Hertz, so 10Hz).

Controlling flow rate by adjusting duty cycle and cycling frequency of nozzle while maintaining a constant pressure provides distinct advantages over controlling flow by adjusting pressure.  If you turn off just one nozzle, with a standard system you compromise the application –– you need a minimum of three for effective coverage –– because of the overlaps.  A PWM nozzle can do this on its own.  Pulsing the output of the nozzles maintains the flowrate with only a very small variation in pressure.  The output in the required litres/sec is maintained by the length of time the nozzle stays open –– varying this, instead of the pressure, maintains the output to match the speed. At the same time, it maintains the droplet size and does not affect the angle.  PWM enables one nozzle to provide a wide range of flow for different applications.  It works with all standard spray nozzles, apart from air-induction, because they use a venturi.   Manufacturers have also been working on ‘turn compensation’ using PWM to regulate the nozzles on the inner and outer sections of wide booms. This will maintain the proper application rate and coverage by compensating for the difference in speed of the outer edge, which will be moving much faster than nozzles closer to the vehicle while turning.

Operating in suitable weather conditions and using buffer zones, a general reduction in spray drift may be achieved through appropriate nozzle selection. Hydraulic nozzles are highly versatile in terms of choice of spray pattern, angle and size.

Nozzle selection should be made on a case by case basis; taking account of each operational parameter to ensure optimal product delivery and performance. A complex range of factors that influence sprayer output, and thus product delivery, must be considered. Flow rate (water volume), operating pressure, boom height, product formulation and concentration may all adversely affect spray quality and product efficacy.  Ultimately, however, a better level of coverage is achieved by 90% drift reduction nozzles with a coarser spray quality being less prone to off-target spray drift.

Nozzle design development could give valuable extra spray days to deliver crucial blight protection on time.  In sub-optimal weather conditions or at close-proximity to sensitive crops, the risk of drift may override the use of medium to fine spray quality emitted from conventional flat fan nozzles. 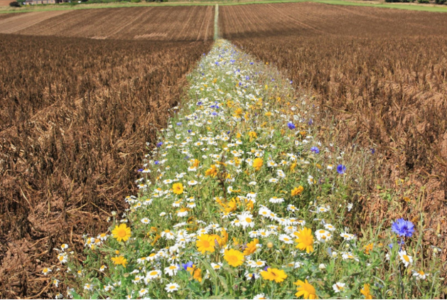 The visual proxy provided by the wild flower strips where the operator used Lechler IDTA nozzles all season has impressively mitigated spray drift of both herbicide or desiccation.   The wild flower strips were sown in the middle section of the spray boom, with blanked nozzles inserted over the flowers.