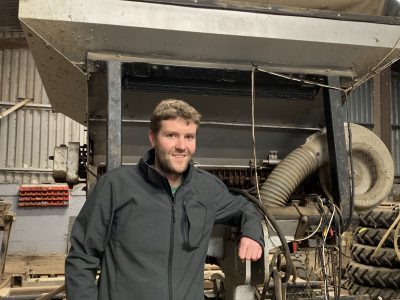 When he made a wholesale change from pigs to arable on returning from college to the 200Ha family farm in 2012, Craig Peddie had to make agronomy his secret weapon.

“We’d always had cereals on the farm but they were grown entirely for the pigs. Our only output was pork and I felt we were vulnerable, so shifted the emphasis to more arable.

“I had studied agricultural engineering at Harper Adams and even though I had worked on the farm over the years – and my father was a founding member of Scottish Agronomy’s Fife group – I felt I lacked the base knowledge of growing cereals well.”

The coastal farm is split between heavy clay soils and lighter sandy terrain running down to the sea, so Craig has developed two rotations to suit the different soil types. Potatoes are only grown on the lighter land, between first wheats, oats and beans while wheat, oats, barley, OSR and beans make up the rotation on the heavier soils.

“Being part of Scottish Agronomy makes you think and brings your base standard of agronomy up. With serviced agronomy from chemical distributers sometimes you don’t know what you are putting on your crops or what for, but by learning more about the science I can challenge, question and understand what I am doing. The group format has been good for bouncing ideas off one and other and learning from others’ similar experiences, and particularly for giving me confidence to try new things.”

Craig, who is keen on minimal cultivation, has used his engineering skills to build his own machinery to tackle some plough-based challenges and also created his own trial plots to experiment with different establishment methods and inputs.

“This year we trialled three different establishment methods for oats to see the impact on yield, as well as different rates of foliar nitrogen on wheat. It was really interesting to see how one element changes the physiology so dramatically and how it can impact different growth stages.”

The Scottish Agronomy trials have been a good local barometer, he says.

“You can take the data that you need from these and it allows you to keep on top of the game. Also, if a top variety hasn’t worked in the trials one season, you know it’s not just you!”

Craig reinstated the pigs on a bed-and-breakfast basis after 18 months, now finishing 2400 pigs a year and using the dung to improve soils and reduce the need for P and K.

Craig’s progressive approach won him a place as a finalist in the 2019 AgriScot Farm of the Year Awards.